Dark Mountain will premiere February 2, 2022 at The Flying Monkey Movie House and Performance Center in Plymouth, NH. Doors open at 6:15pm, film starts at 7pm. Buy your tickets now at their link: https://www.flyingmonkeynh.com/events/dark-mountain/

After two years in the making The Beaumonts is finally unleashed upon the world. The first screening was a huge success which was held on Tuesday April 3 at The Flying Monkey in Plymouth, NH!!

Purchase your DVD copy of the Beaumonts here. Don’t forget immediately following the end credits is 7 minutes of blooper reels!

After a year of shooting ”The Beaumonts” independent movie trailer is finally up! Lots of editing to do now, I hope to have the film ready to screen at the Flying Monkey in the town of Plymouth, NH in February 2018.

My partner in crime Matthew Cheney wrote and excellent blog about shooting Zombie Boy recently and I wanted to share it. Matt is not only an actor but a teacher, book critic, screenwriter, and a novelist as well. His book “Blood Stories” is being released in January.

I confess I got teary eyed after reading this, the fond memories of shooting ZB all came flooding back into my mind. I still can’t believe we pulled it off. I owe you a beer Matt, probably a lifetime’s worth!

People often ask me, “What do you do to pass the time up there in New Hampshire?”

Well, when we’re not cavorting with moose, celebrating the glories of our granite, and generally living free before we die, some of us make silly movies.

One that I was involved with is called Zombie Boy, which was written and directed by my friend Jamie Sharps. Against all odds, it now has distribution via MVD Media. It should be coming to various streaming platforms soon, and you can order the DVD from most of the places online where you’d order DVDs. (Here’s the Amazon link, for instance.) There are even rumors of it showing up in some brick-and-mortar stores.

It’s a spaghetti-western-style comic adventure involving people who’ve been zombified by a green serum. It’s not a B movie, it’s (intentionally) a Z movie. (“Z for zombie, yeah!” I hear somebody say…) We didn’t have much money, and it took a couple years to get it all filmed and then another year to do post-production.
And yes, I am Zombie Boy. 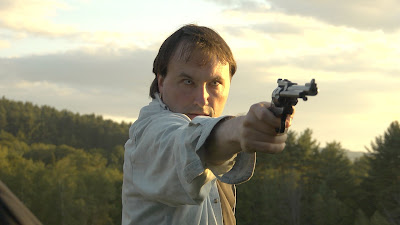 I’ve done lots of theatre acting (not so much in the last decade, for various reasons), but had mostly avoided film acting until Jamie called me up and asked me to play the role. I don’t like watching myself, don’t even like pictures of myself, so I never ached to be a movie actor. One of the prime attractions of theatre for me is that I don’t have to see my performance. I said yes to Jamie because it sounded like fun, and he promised it would only be a few weeks of work. It was often fun (and sometimes not; those contact lenses are awful), but it definitely took longer than a few weeks. We spent most of one summer working on it, had a few days of filming that fall, then filmed for a few more days the next summer.

Despite my dislike of looking at myself, I don’t mind watching this performance. Partly, that’s because it’s so over the top. I shamble, mug, and grunt for an hour and fifteen minutes. I watch the movie and I don’t see me, so it’s not discomforting. It’s just some weird guy.

But also, for what it is, I think Zombie Boy is a pretty good movie. The genius of it is that it embodies its concept completely — from start to finish, it’s a super-low-budget romp made by people who wanted to do nothing more than make a super-low-budget romp. There’s a guy wearing a tattered bear-skin coat and not much else. There are incompetent ninjas. There’s a doctor who speaks like a Werner Herzog version of the Swedish Chef. Why? Why not? 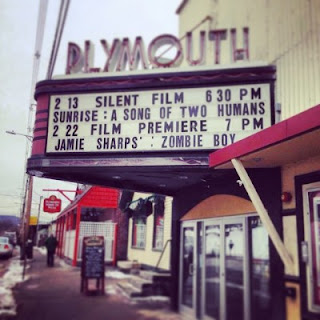 I can’t tell you how many times I’ve watched the movie, from looking through the footage when we shot it to helping Jamie with a little bit of the editing to watching it at the local premiere (in the theatre where as a kid I first saw Raiders of the Lost Ark and the first three Star Wars movies, among others, so it was quite a thrill) to showing it to various friends and family members. When I got the finished official DVD the other night, I sat down and watched it again from start to finish, for the first time just on my own. I had intended to watch only five or ten minutes to see how it looked in the MVD version. But I watched the whole thing. Partly because it was fun to see everybody again, fun to remember some of the amusing and/or arduous moments on set, but mostly just because it’s great, stupid fun. Sure, there are awkward moments and clumsy moments, but that’s part of what this movie is, part of the joy of it. There are also moments that are just ridiculously funny, and there’s an energy to the whole that is infectious.

Well, I’m not going to review a movie I starred in (much as I’d like to, because after all, the political ontology the film limns is— okay, I’ll stop). There’s plenty that could be said about Zombie Boy. But perhaps nothing needs to be said. It is what it is, and, for me, what it is is something I’m thrilled and proud to have been part of.

After the premiere, a friend of mine slapped me on the back and said, “No matter what else you do, they’re going to put Zombie Boy on your gravestone.” I’m okay with that.

Harry Batchelder wrote a very detailed and well written review of ZB recently. Mr Batchelder is a famous (or infamous?) New York City Attorney at Law that has a serious love for Independent films. His review was published in the Record Enterprise of Plymouth, NH.

Jamie is thrilled to announce his new action/comedy film “Zombie Boy” which premieres at the Flying Monkey Movie House and Performance Center Saturday February 22, 2014 at 7pm.